In the New Testament book of Acts, Luke carefully records the beginning of what could only be described as an explosion of church growth throughout the known world. Within a few short centuries, Christianity was well on its way to becoming a world religion.

Church growth in the New Testament was characterized by:

Interestingly, the past few decades have witnessed a return to these trademark values, resulting in hundreds of new “Kingdom movements” throughout South America, Asia, and Africa. When will it be North America’s turn? When will Europe and Australia/New Zealand catch on? 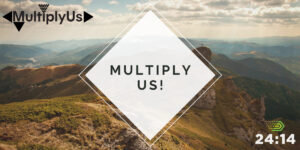 The answer is: Now. At least that’s what many key leaders are hoping. In an effort to catalyze just such an awakening in North America, the global network known as 24:14 has partnered with More Disciples to launch a series of online events featuring early examples of start-up movements in the USA.

MultiplyUs, the first event in this series, is scheduled for October 1st, from 2:30 until 4:30 pm EDT.

This event will take place online.  You’ll hear multiple stories that give a glimmer of hope and light for Kingdom movements in the USA and Canada. If you hope to see a movement in YOUR hamlet, town, city or state, don’t miss “MultiplyUs!”

This event will be recorded.  To receive the recording, please register.  You’ll receive a link as a follow-up email.

(All times are in EDT)

Lee Wood is the Founder and initial catalyst of 1Body Church, as well as a missionary and Apostolic leader with a world vision to launch disciple-multiplying movements until the whole world knows Jesus. He leads and mentors key leaders in launching small home churches to spread the Gospel, starting in the smallest expression in his home in Tampa and eventually across the whole world. This aligns with his philosophy of “dream big, work small.” Lee is married to Stacy and is the father of five and grandfather of five.

Chris is the pastor of Experience Life in Lubbock, Texas, and was recently named the youngest mega-church pastor in the country. The church was founded in his living room in 2007.
Experience Life’s original prayer was for 10,000 people to commit their lives to Jesus in 10 years. After the Lord answered that prayer in year 8, we believed the Lord was leading us to pray for 1,000,000 people to become disciples of Jesus in the next 10 years. As a result, we knew we needed to transition from a “megachurch” model to a “multiplication” model because the way millions are coming to Christ around the world is through the multiplication of thousands of smaller churches which meet in homes, much like in the Book of Acts. Experience Life is now meeting in many homes across West Texas and around the United States.