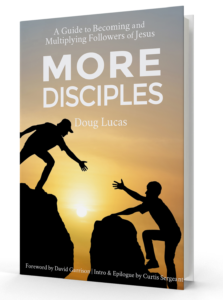 As a follower of Jesus, what’s the one thing you can take with you from this life to the next?

The answer: More Disciples. More Disciples is a practical, how-to guidebook that lays out a clear path for learning and implementing church-planting movement (CPM) and disciple-making movement (DMM) strategies and life principles. It includes, in text form, all of the concepts of the web-driven course, ZumeProject.com.

Author Jerry Trousdale said, “More Disciples is truly an excellent resource for people wanting to get started, or get better at, catalyzing multiplying disciples. But it will also be a very useful reference resource for CPM/DMM veterans.”

The truth is, this book could change your life — as well as the lives of your neighbors and nation. Read it, then most importantly, do it.

Available in Paperback, Kindle, and Audio

What People are Saying about the book, More Disciples: A Guide to Becoming and Multiplying Disciples of Jesus

“In More Disciples, Doug Lucas examines a broad range of movements that multiply disciples and churches. He identifies the common principles and the variety of methods. The book is comprehensive and points the way to further learning. A great reference.”

“More Disciples addresses head on the fundamental question: What’s it going to take to bring the world to faith and discipleship in Jesus Christ? From this clarion call to make disciples, we learn what it means to be a disciple and then move on to the question of “How?” More Disciples takes the centuries old-challenge and, through the grace of God, places it within our grasp.”

“The tools and concepts in this book provide ways for us to be intentional in listening to God, pursuing the life He intends for us, knowing Him more deeply, making Him known more effectively, and, most importantly, loving Him more passionately. It provides a toolkit to help us build in this way. May you become a skilled craftsman.”

—Curtis Sergeant, Founder of MetaCamp, content creator of the
Zume course, and a trainer in disciple-making movements

Doug is founder and President of Team Expansion (TeamExpansion.org). He has led teams in Uruguay and also in the USSR (Ukraine), where God raised up the beginnings of a church-planting movement. He has a Masters Degree in Missions, along with an MBA and a Doctorate in Business Administration. Since 1995, he has edited Brigada, a weekly missions e-zine (brigada.org). He is married to Penny and they have two adult children, Chris and Caleb.

David serves as Church Planting Consultant with Missio Nexus and is Executive Director of Global Gates (GlobalGates. info), a recruiting, coaching, and training organization based in New York, New York. He has a PhD in historical theology and is a veteran of more than 30 years as a missionary pioneer. He wrote The Nonresidential Missionary (1990), Church Planting Movements (2004), and A Wind in the House of Islam (2014).

Curtis served as a missionary on a large island off the coast of China from 1991 to 2002. While there, they saw God increase the number of Disciples from 100 to over 500,000, primarily through multiplication of simple reproducible tools. Since 2015, he has led in developing the Zúme Project (ZúmeProject.com). He has a Doctorate in Missions and is the Founder of MetaCamp (metacamp.org).  Curtis is the author of The Only One: Living Fully In, By, and For God which can be purchased here: https://missionbooks.org/products/the-only-one.