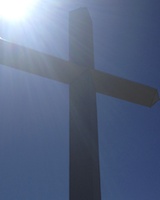 Day 17 – Caring Enough to Save Life

Jesus said a lot of hurtful things to the Jewish leaders.  Look at Matthew 23, and the 7 woes; repeatedly he calls them hypocrites!  Was it because Jesus didn’t care about them, didn’t love them?  Or, was he harsh to them to try to save them?  He did rescue at least two — Nicodemus and Joseph of Arimathea — who later buried Jesus.  And, here’s the unescapeable point — Jesus became public enemy No. 1 because of all the things he said about the religious leaders.  In fact, it was their hatred of Jesus, because of his harsh words, that led Jesus to the cross.  Then, Jesus told his disciples to pick up their own crosses and follow him.  If we truly follow in Jesus’ footsteps, will we not then be willing to tell people the truth, in love, and with respect; even though it may lead them to despise us.  Like Penn Jillette says,  “If I believed with all my heart that a truck was coming to hit you and you didn’t believe it, there’s a certain point in which I TACKLE you to save your life.”  If I truly love you, the priority is to save your life.  Eternity trumps every other issue.