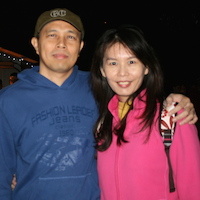 Day 16 – Searching for People of Peace

We had just moved to the third largest city of Taiwan to begin a new church plant.  While prayer walking we noticed lots of children in our neighborhood.  In Taichung, grade school children only went half a day on Wednesdays.  We thought, what if we started an after school program on Wednesday afternoons, and did a VBS style outreach?  Since we were new to the area, we would even invite parents to sit-in.  While prayer walking, we handed out flyers near the elementary school for our “King’s Club.”  One of those flyers landed in the hands of a 2nd grader whose English name was Vincent.  His mother, Joanne, brought him faithfully and stayed to hear the Bible stories.  Joanne and Vincent became the first to believe in Taichung.  Joanne brought many more, including her husband, James.  This couple became like Aquila and Priscilla — a true family of peace.  The church now meets in their home.  I believe God can raise up people of peace in every neighborhood — even in America!